My first day back to work after vacation, I approach the time clock. My boss tells me that my other boss wants to see me after I clock in. This is not just my boss, it is one of the owners of the business. My first thought was, "Oh crap, what did I do wrong! I'm in trouble for taking time off." Come to find out, a position opened in the business office. The Accounts Receivable position. I was shocked, and a little hesitant to take it, but there was a raise involved. Of course I accepted it.

I have been working in the business office for a couple weeks now. The best thing about this new position..don't have to wear the ugly white T-shirt anymore. I can wear anything I want to (as long as it doesn't have a bar on it), but that means I have one more decision to make right after getting out of bed. I think I can handle that.

Not only do I handle the accounts receivable, I take care of the in-house accounts, payroll, balancing the registers, updating sale signs, and misc. projects. Another responsibility that comes with this position, I get custody of "the children". Who are the children? The paint department, but I love them all.

There are many personalities in the store, and it is a good place to work. We have many "long-timers", the longest being the Store Manager... 36 years. Next in line, in the Special Orders office, 19, 17 & 12 years. Eight other employees have over 7 years with the company, and I'm sure they are "long-timers" also.

But, we also have the "short-timers", as they are called. Customer service is strongly stressed, and it is a fast-paced store. The majority of our sales are workers just trying to get a part for their job, and they want in and out as fast as possible. This work environment is not for everybody.

I started out at the register, was there for about 5 months. Then I was asked to balance the registers also. I enjoyed that, getting away from the register for 1 1/2 hours in the morning. A couple months ago, I was pulled from the register and started receiving deliveries. I really liked this better, but I did miss seeing our regular customers. Now, I've moved upstairs in the business office.

My only request before employment at Strunk Ace Hardware.... I need my weekends off. I have stood firm, and I've been granted my wish. I want to enjoy life, take those weekends on the water. Life is too short. Take every opportunity to do something fun, don't pass it up.

"BE BOLD AND COURAGEOUS. WHEN YOU LOOK BACK ON YOUR LIFE, YOU WILL REGRET THE THINGS YOU DIDN'T DO, MORE THAN THE ONES YOU DID."

If asked what surprised me the most about Costa Rica, I would have to say, "The fences." Fences, you ask? Fences for pasture are made from barbed wire, and post are branches cut from trees. The soil is so rich and the weather so perfect for growing, the "post" form roots and sprout branches themselves becoming trees. As a child, I remember our family used commercially treated post for fencing. It was treated to prevent rotting in the ground. The post in Costa Rica don't have that rotting problem, because they are living structures. Amazing!
The volcano is amazing. It is still active and the lava is visible on the sides. Since it is still active, there are several hot spring resorts. We visited one called Tabacon. It was wonderful with many private pools and small waterfalls. The water was very warm and flowed quickly. The last pool, complete with a water slide, had a bar at the far side. I couldn't resist trying out the slide. It was as much fun as I thought it would be. 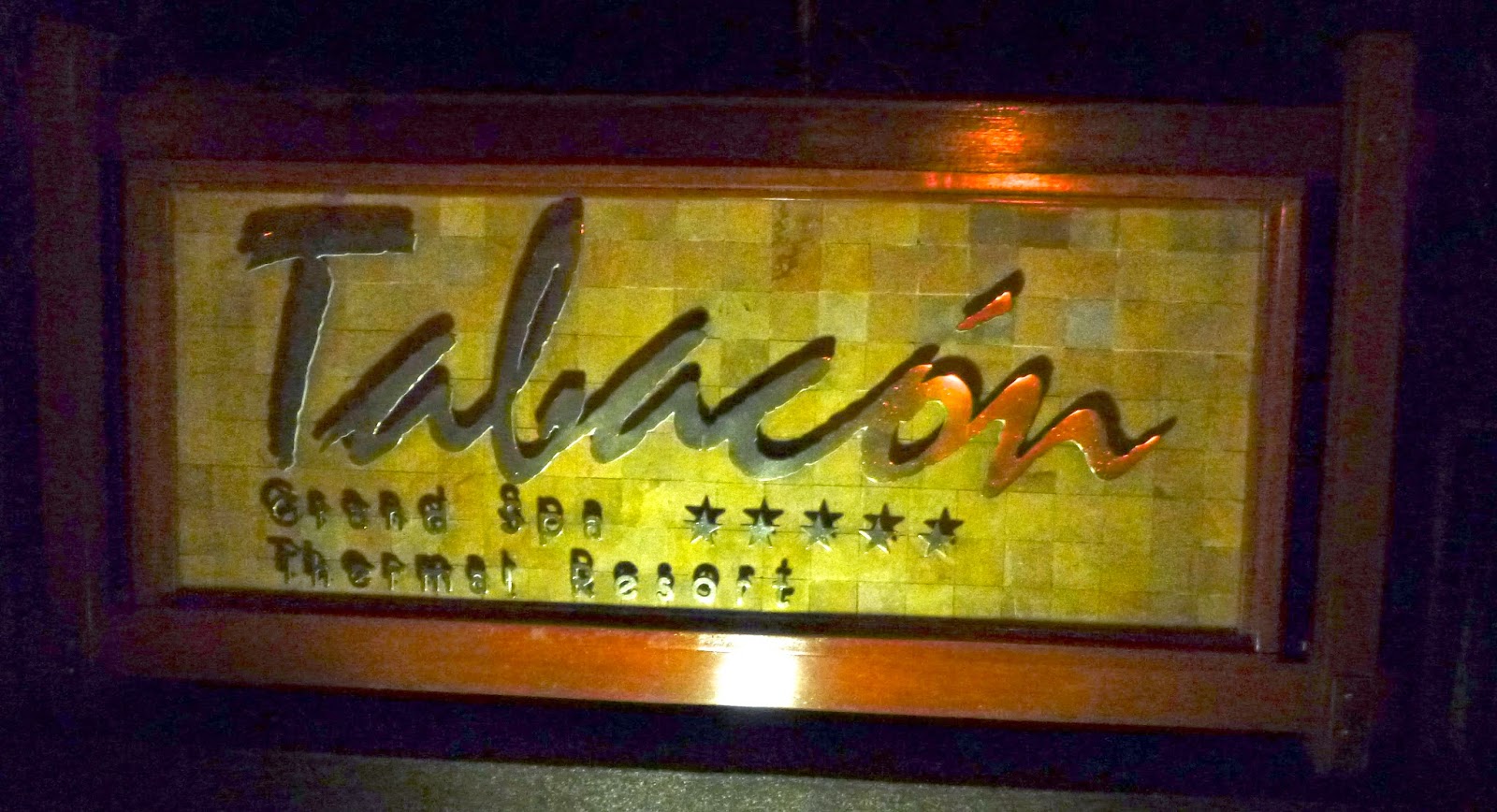 Lake Arenal is very large, but we only saw one boat on the lake. Chuck, being a true angler, packed his travel rod and reel in hopes of catching something on the vacation. The fish were not cooperating that morning, so we took the 4-wheeler to the Butterfly Conservatory. I learned that butterflies have host plants. They are picky eaters, only eating one type of plant. The butterflies were very active, and very pretty. 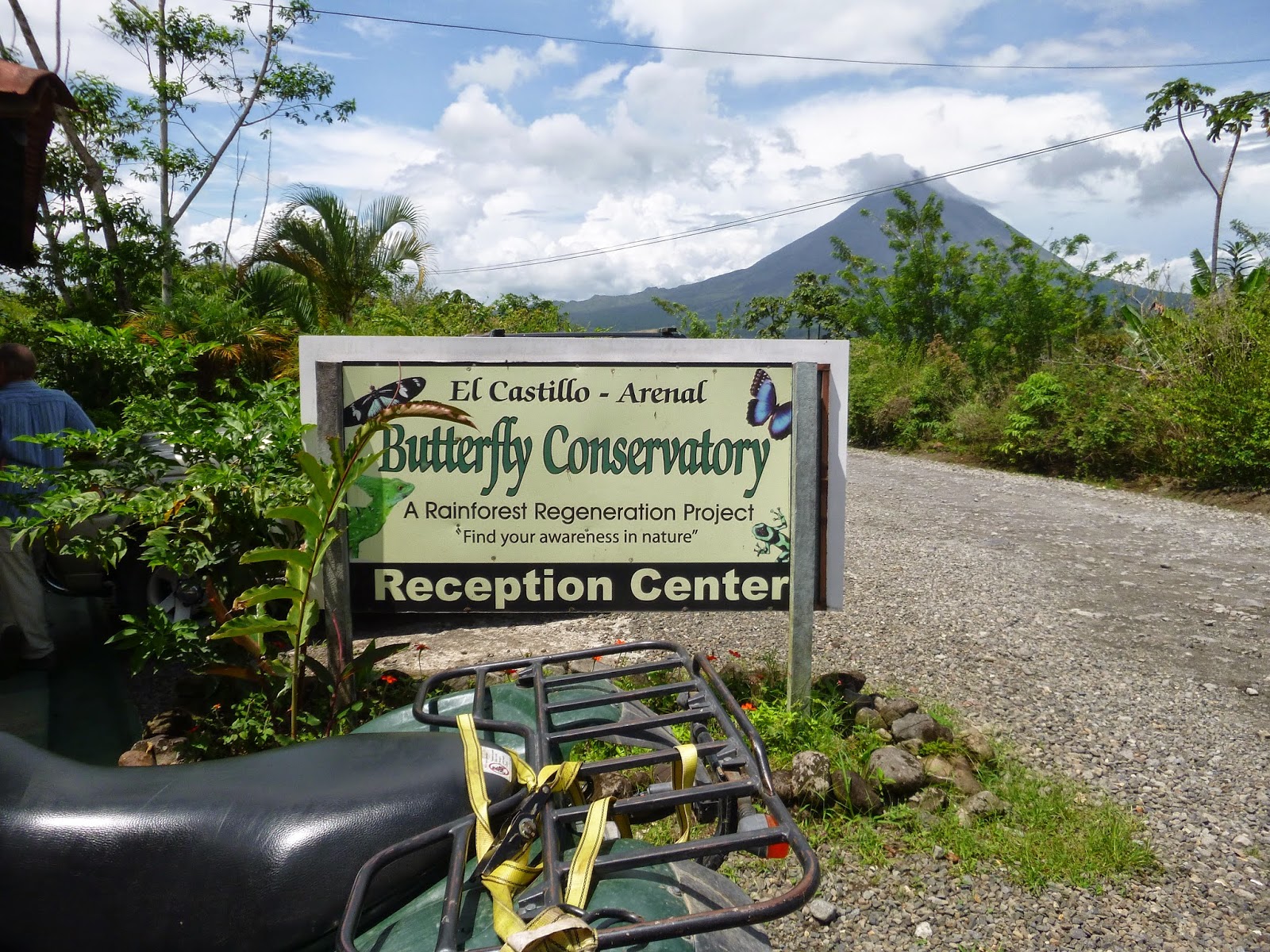 After the butterfly museum, we visited the snake museum. There are vipers in Costa Rica, and we saw one while horseback riding. Both of these museums were very interesting. 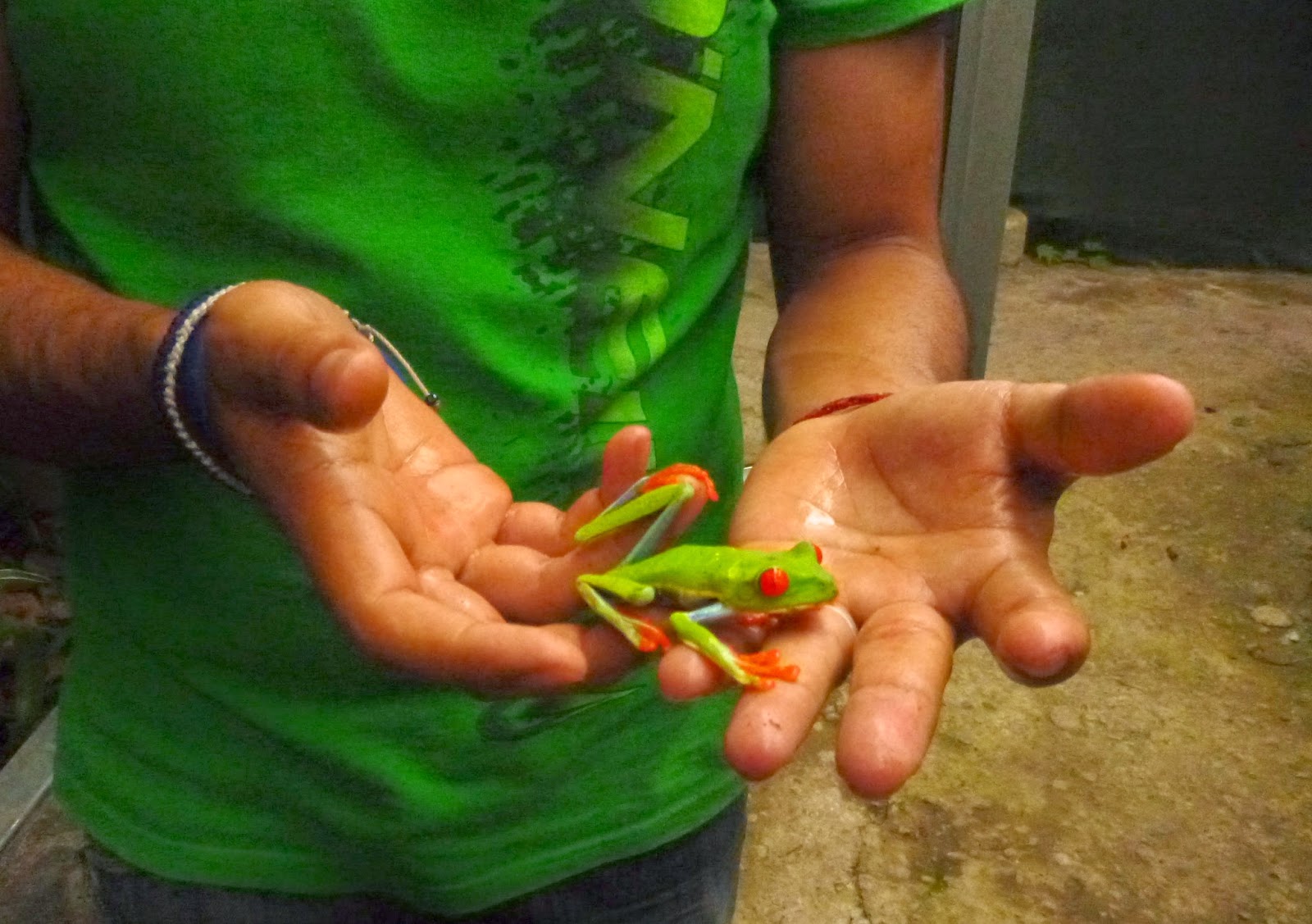 Our last day there, we went to Sky Trek. You ride a gondola up into the mountains, and the only way to get down, is the Zip line. It was so much fun. 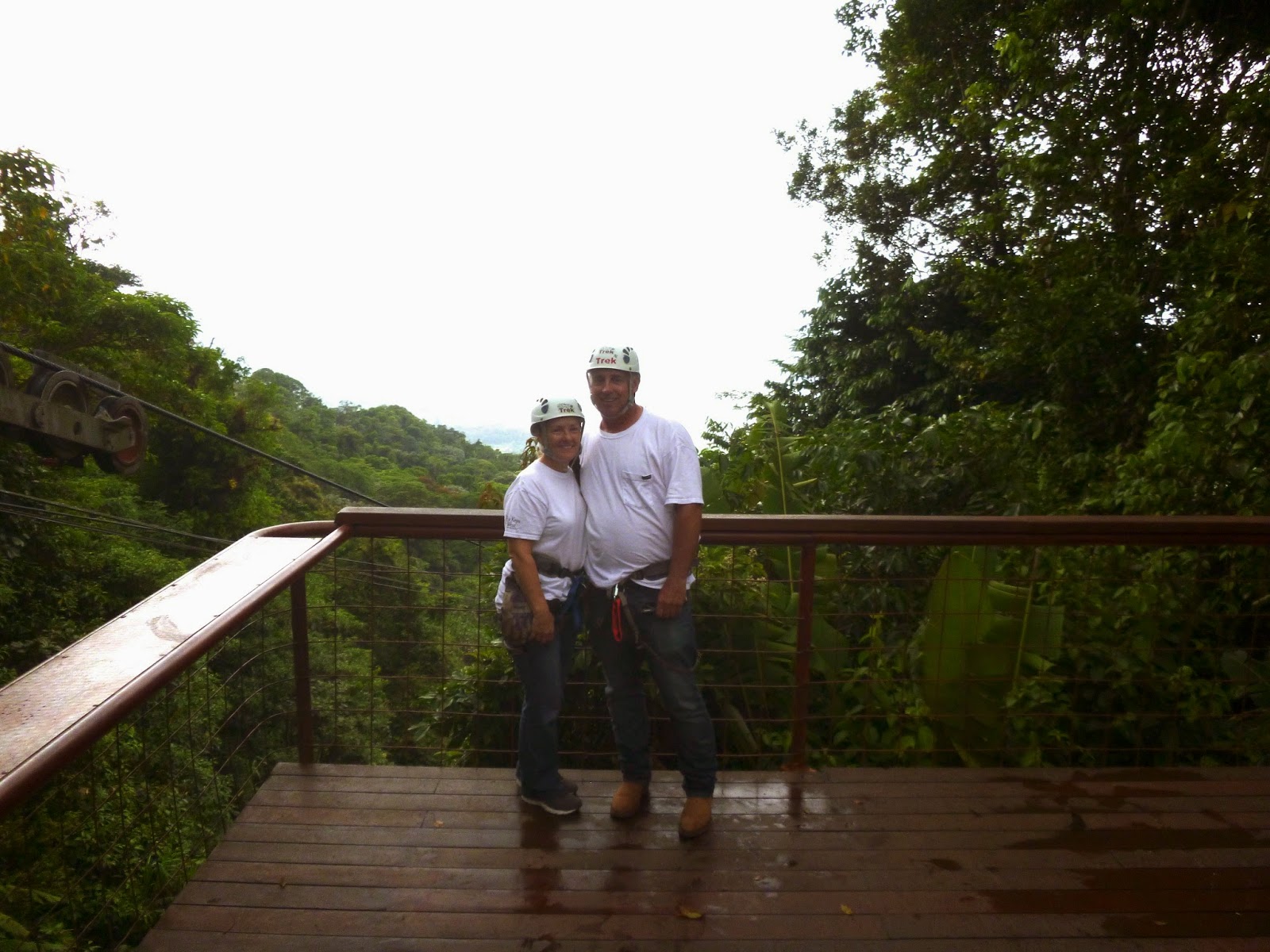 On our last night, we had dinner with three of our friends. It was a fabulous meal, I had the Gordon Blue Chicken. Okay, I think they meant Cordon Bleu. The food was excellent, and the company even better. After dinner we all gathered in the hot tub at the Majestic Lodge. It was a perfect end to a perfect vacation, and I know I will get to do it again some day.
Posted by Lezlie's World at 5:30 AM No comments:

I could hear my heart racing as my eyes were fixed on Chuck flying down that cable, when I finally heard J.P. calling me, "Señorita … Señorita." Oh, but, wait… I should start from the beginning.

Chuck is a CPA and works long, hard hours to make the April 15th tax deadline. In years past, he jumps on a plane April 16th and heads to Costa Rica for a ten day, well deserved vacation. But this year, he wanted to share his vacation in beautiful Costa Rica, so he delayed his flee from the States until I was able to get time off from my work. April 26th we boarded a plane and escaped our every-day life and entered the world of the Ticos in Castillo, at the base of the active volcano, Arenal. Let me stop right here and tell you guys, Costa Rica is a wonderful place and everyone of you should make a trip there at least once in your life… it's that great.

Chuck has been going down there for the past ten years. He is friends with the "gringos" from Key West that have created a wonderful Bed & Breakfast with a spectacular view of Lake Arenal and the volcano. This is where we stayed for a week, Majestic Lodge. The view from the lodge is spectacular; the lake, the volcano, and the mountains in the background. The sounds coming out of the rainforest in the early morning light are mesmerizing. The howler monkeys are very vocal, and the birds are many. 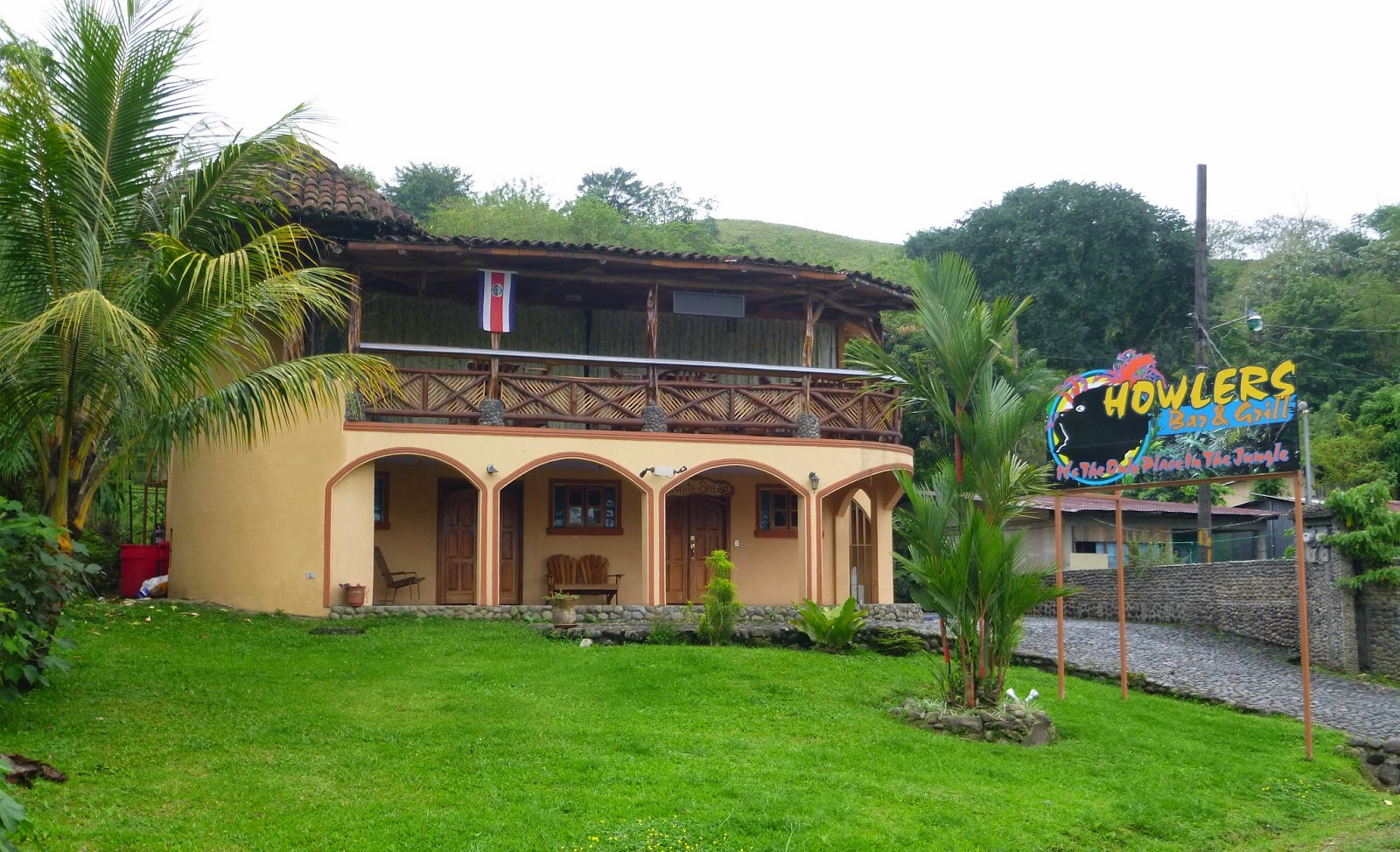 The owners of Majestic Lodge, one night over a few drinks, decide they wanted to open a bar & grill. Twenty-eight days later, Howlers, opened their doors for business just up the road from Majestic. It is presently closed for remodeling. We have been invited for the reopening, sometime in the near future.  I'm hoping my boss will be generous and let me have time off for this reopening. I have my doubts though. I've already taken three weeks of vacation, and I haven't been at Strunk a year yet. What do you think? Will they or won't they? Let's take a vote. 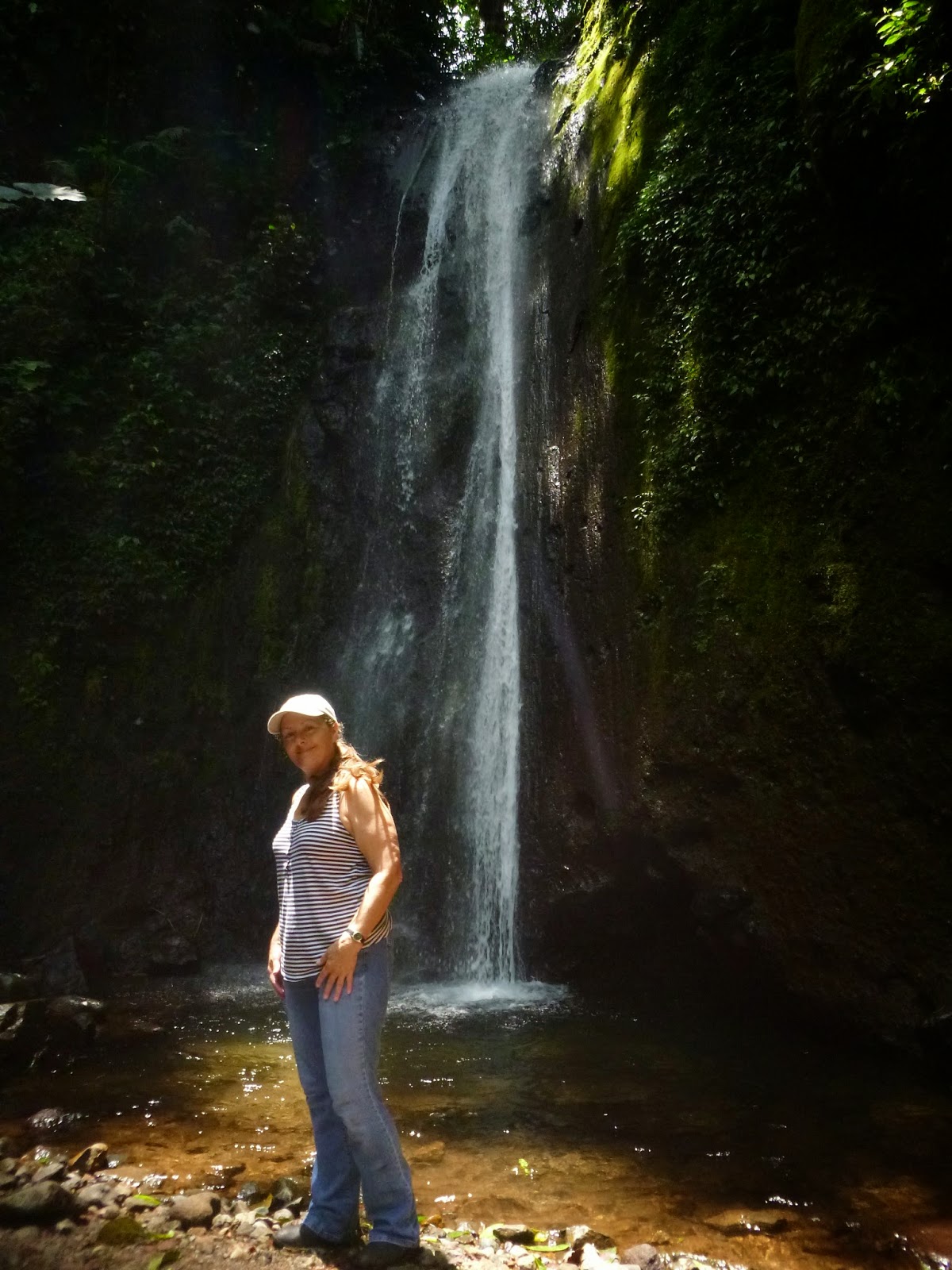 I've heard so much about this peaceful area, and Chuck had a list of things he wanted to show me now. The one thing I was looking forward to the most was riding the horses, and I got to do that three days. Our longest outing was the ride to the waterfall. The trail lead us first through a pasture, then we entered the forest. Just like the "RAINFOREST" indicates, it rains often, therefore, there will be mud. These horses were good "mudders" and very surefooted, even while skating down a steep, knee-deep muddy slope. Just give them their head and they will make it through. I was impressed.

Our destination, the waterfall. Sitting at the edge of the small pool, looking up, there was a mist coming off the rock wall next to us. It was one of those "WOW" moments. The two dogs that joined us on the journey, took a dip in the cool water, and then wanted to love on me… or just wanted me to share my peanut M&Ms. I want to believe he just wanted to be near me, and of course, get me wet. 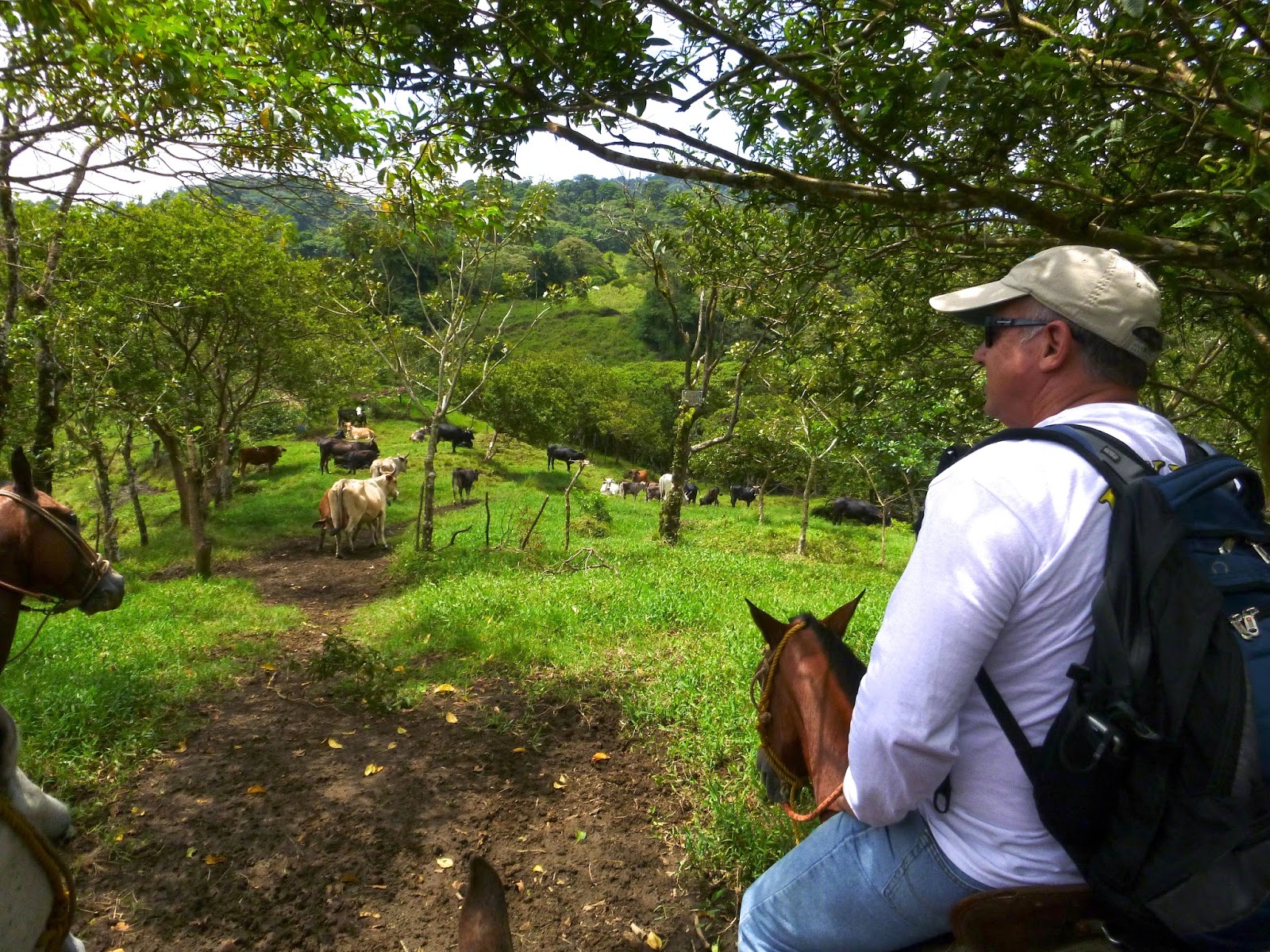 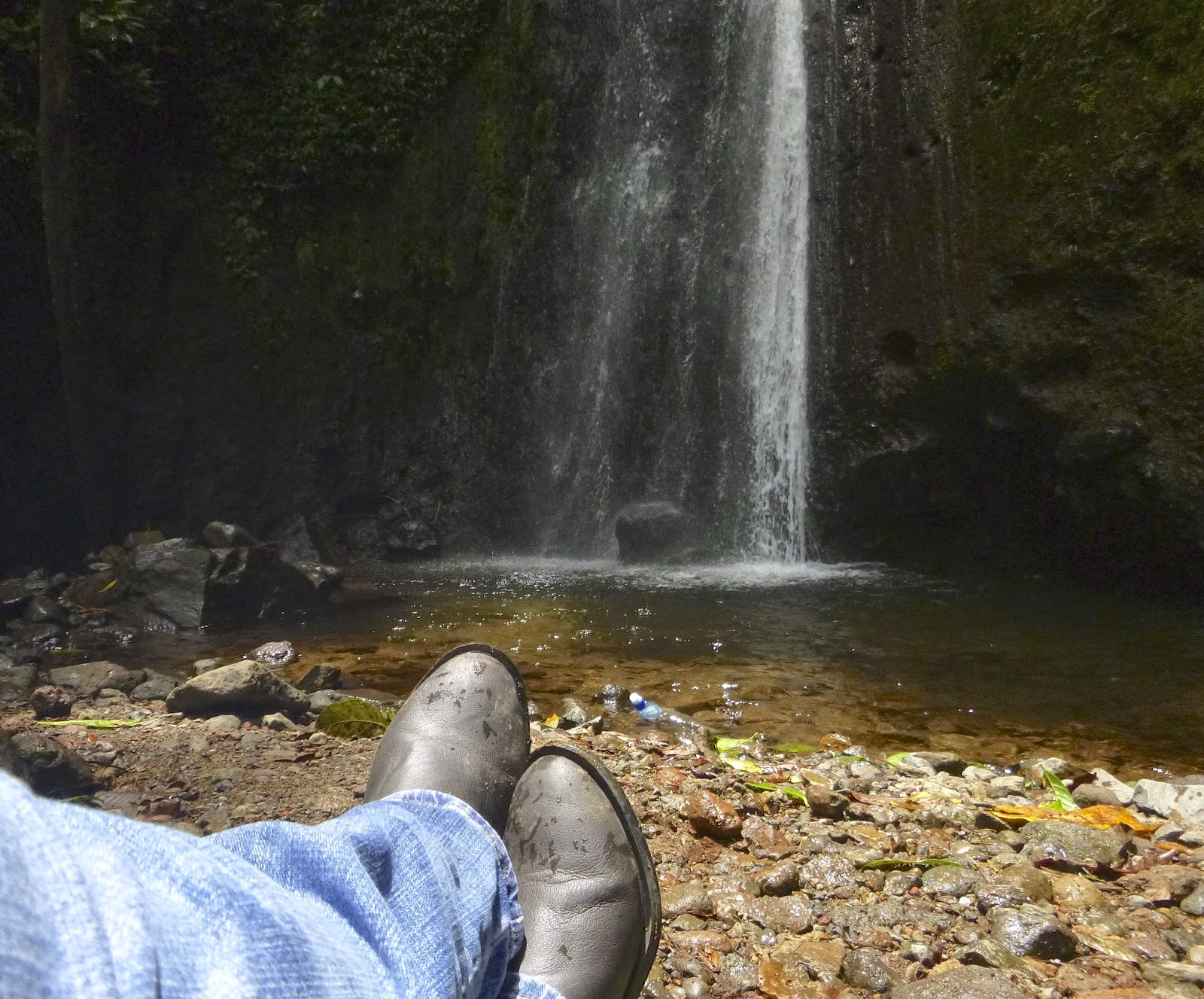 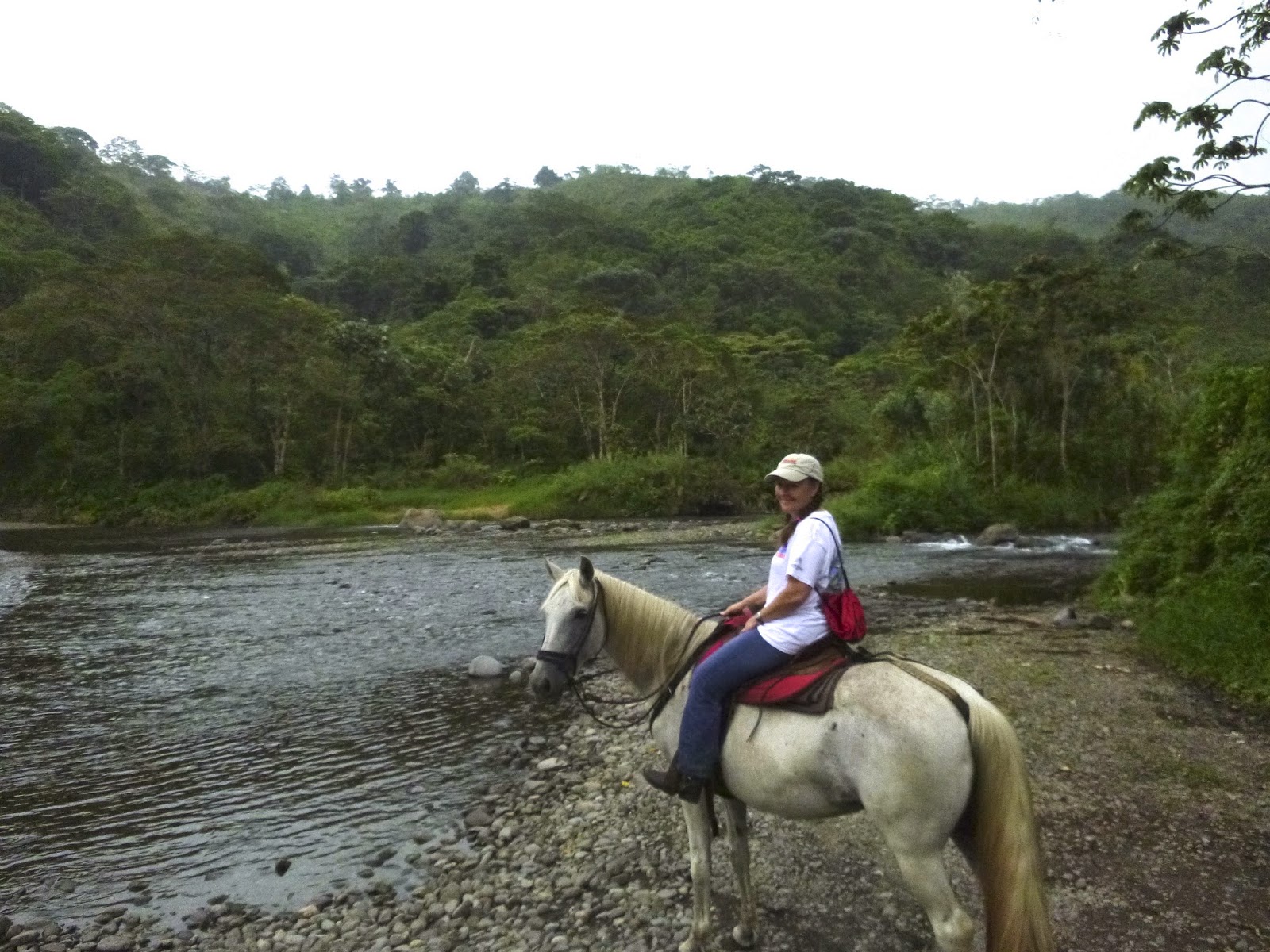 Not only did we get to ride to the waterfall one morning, we also took a couple horses of a friend out for a ride one afternoon. We crossed the river that crosses the road. Yes, there is no bridge. And on our last day there, our friend joined us for another afternoon ride. This was the third horse I rode, and fell in love with him, Pazzaz. I threatened to smuggle him onto the plane and bring him home. I was promised he would be waiting for another ride on my next trip there. I am looking forward to it.


A few days before we left for Costa Rica, Chuck asks if I have a pair of boots. On my attempt to down size for the adventure on Kairos, I decided there would be no use for the Roper boots I owned, and parted with them. Now, without boots to protect my ankles from a potential snake bite in the Tropical Rainforest, I needed to find a pair. Okay, in Key West there is not much of a selection of stores to shop, and NOTHING to buy boots. But, I thought MAYBE K-mart, or Ross might have something. It wouldn't be the cowboy boots I prefer, but maybe something. NOTHING. I wanted to get a new bathing suit, so I did stop in the Beall's outlet we have here. Most of their inventory is beachwear. Coming out of the dressing room, I glanced to the far side of the store, I saw a shoe rack. On the off chance they had something for me, I strolled across the store. When I got closer, I realized it was all children's footwear, but I rounded the corner, and saw about 5 pair or boots. One pair looked a little larger than the rest. On the off chance that this kid's boot fit, I tried it on… and they fit! Yes, they were vinyl and rubber, but they fit. Actually, I found my last pair of cowboy boots in the kid's section. This pair held up better, and were more comfortable than expected. Knowing they would not last much longer, we stopped at a leather shop in San Jose on our way to the airport. They will make you a pair of boots, specially for your foot. We didn't have the time for that, but thought maybe they would have a pair already made that would fit. As I approached the doorway of the little shop, the aroma of leather was intoxicating, I was in heaven. Inside, there were walls of boots, and even boots hanging from the ceiling. There were also about ten saddles. I did find a pair that fit, and the price was right: 40,000 colones, or $72.44 US for a pair of hand-made boots from Costa Rican leather. They will last forever.

After moving to Key West, my daughter asked the question, "Living in Paradise, Key West… where do you go for vacation?" Now I have the answer… Costa Rica!

Posted by Lezlie's World at 5:36 PM No comments: 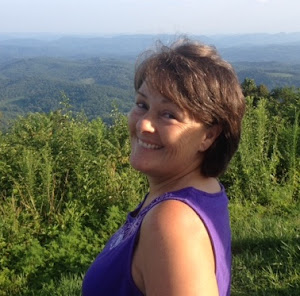 Welcome to my blog. Here is a peek into my world; living in Key West, sailing, fishing and so much more. Isn't life fun?!